From the depths of the urban smog, smouldering nuclear headlights emerge followed by something that looks like a car but not as we know it - hovering a hundred feet above an apocalyptic cityscape. The car burns red under angry neon lights. The camera pulls away to reveal - with horror - the familiar spencerian script of the CocaCola logo, 100 feet high, triumphant over the wreckage beneath. And that’s when you realise this isn’t some distant alien world - it’s our own not too distant future.

Its October 21, 2015 and Marty Mcfly is pulling sweet jumps on his hoverboard as the futuristic Texaco garage performs a robotic oil change in the background.

Whenever Hollywood has looked to depict a future, dystopian or otherwise, one of the most common tropes is seeing the American dream run wild with familiar branding and advertising taken to uncomfortable, dizzying heights.

So, when I found out we were creating a virtual reality video game set in a dystopian future world and it needed Resulting branding I knew what to do.

Our game designer, Nathan, made the decision to set the game aboard an abandoned spaceship which housed a research facility. This meant that there would be plenty of screens around the game - giving me plenty of opportunity to display Resulting’s logo loudly and proudly, depicting us as the omniscient and omnipresent authority that every truly twisted dystopia needs.

Rather than simply using the vector image of our logo, and to give the game a little of that retro-futurist je ne sais quoi, I opted to create an animated spinning version of our logo in Adobe After Effects. Then, I created a number of iterations applying effects to give the animation that wavering and off-hued look that screams “this is what we thought the future would be in 1985”.

Add to that a touch of flickering screens and distortion - this is an abandoned spaceship after all - and Resulting was ready to haunt the ghostly halls of the Research Facility.

While it was good fun to re-imagine the Resulting logo like something out of 5th Element, the reality is that just sticking a logo into the game - spinny animation or otherwise - isn’t enough to make a truly and immersive branded world. After all when you go to Disneyland it isn’t just a load of bland warehouses with a bunch of mouse ears spray painted all over the place.

When you go to Disneyland every inch of every surface has been considered, designed and crafted to create a fully immersive experience. In the design world this process is called “theming” and it’s what we needed to do in the game if we were to create a world that really felt like you were on a Resulting owned research facility floating in outer-space.

By subtly adding elements of Resulting’s branding into the game - a reference to a research paper here, a dash of Resulting yellow there - we were able to create a feeling that the world was a real world, and it was a world that at some point had really belonged to our brand.

Is branding an SAP virtual world what I expected from a career in marketing?

When I took my first marketing job writing blogs for a company that made safety equipment for oil rigs (glamourous I know) did I ever think I would be working on a virtual reality game? No. No I did not.

But when it comes down to it, it wasn’t really that different to normal marketing at all when you look at the big picture.

When it comes to marketing the key thing to think about is the customer experience, and providing a consistent and high standard experience throughout their entire journey.

That’s remarkably similar to what we tried to do with this game. 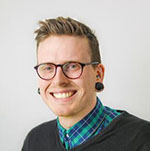 The importance of spending time in worlds other than SAP

For my next trick - Cloud Graph Databases, APIs and Virtual Reality

As someone who doesn’t go to conferences and events, I hate it when someone tries to make me answer a questionnaire. Can’t ...
Start Reading